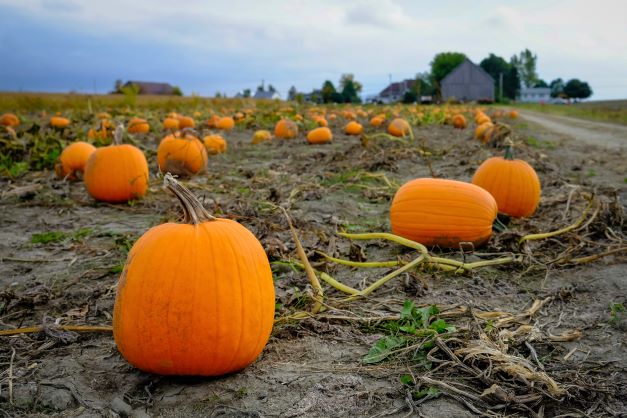 As we tie in the theme of transformation, we know that one of the most critical parts of any transformation happens at the mind level and our brain informing us with its patterns in thoughts, behaviors, emotional reactions, and even chemical & cell repsonse. We resurrected this story that describes a light, simple example of this that not only ties in this month’s theme of transformation, but also lends to this fun and spooky season. Shared here by our Founder, Esperanza Smith, and wishing that you discover transformations all along the journey.

Rushing in with gusts of wind pushing all about, large pelting raindrops against the skylights, dizzying, dazzling moonlight, Autumn announced it had arrived! We welcomed it and made ready for all the harvest hoopla, we could not deny! The month of October swiftly flew by, almost ending before we had had the opportunity to visit a good old farm out in the country, to take in their pumpkin patch, go for a hayride, drink apple cider, visit a haunted house, and the ultra-anticipated highlight…to find that special pumpkin!

I could relate to Linus, of the good ol’ Peanuts Gang, and that special great Pumpkin that would find its way to our home as we walked through the corn maze and out into that pumpkin patch field. We scoured over many picked-over vines, but then, there it appeared in sight! The One! That One pumpkin that outshone over all the rest! Large, tall, perfectly proportioned, and STILL on the vine! Like proud parents, we carefully picked it up, cleaned it up, and carried it back to the farm for purchase. It was well worth the 25lb haul!

Our front door was graced with its magnificence! Ok, you get the point and the similarity between Linus and me. It fit our display perfectly, too Great to carve, it sat out on Hallows Eve night and into our Día de Los Muertos, a three-day celebration. But, on that second night of what is celebrated as All Saint’s Day for some, it was not a Saint who came to our door.

We had come through several enchanting experiences over the past few days and had just finished our evening celebration of Día de Los Muertos. Winding down for the night and settling in to cozy thoughts of sleep, I went out to turn off the festival lights. It was then that I noticed! Oh, Great Pumpkin was gone!

It had been just a few hours ago, when the wind had been howling through the courtyard. We had dismissed some rustling sounds outside due to the wind. I scanned the courtyard walkway. The wind couldn’t have picked up that giant! I walked to the front gate and discovered it was not locking. The other units looked quiet and snuggled in for the night. I went out the gate and there was the Great Pumpkin, SmaSHed!!

I realize this may all sound quite dramatic and I’m not one to usually jump on a drama bandwagon. I did however, at that moment have a rush of emotions, like that Autumn blast at the beginning of the season. By then, my husband was outside, had seen what had happened, and I could see dismay written all over my face. It was such a sharp contrast over the experiences of the past few hours, days, even week. Nevertheless, that misfortune, certainly a minor event in the big scope of Life, but nonetheless significant, was what I faced in that moment; and by that, I mean this.

Immediately, I felt the feelings that arose with any trespass. I felt violated, angry, unsafe, a bit bewildered, and totally stunned. I wanted to blame. I wanted to justify my reasoning for this senseless act and presumed stupidity. Why the nerve, of some prankster’s lack of respect, the inattentive management, the ineffective gate lock system, the howling wind… someone, something to blame, but none of it served another thought that was also wanting to emerge. That thought contrasted with all the loud noise of my emotion.

The thought that came as I sat in bed, and stilled myself over that unhappy event, and the ruckus it had stirred up in my emotion was this. As I stilled myself, and desired peace, so it was being done with every individual and circumstance I had connected to that event. Each of them (well, except for the innocent wind, I thought) played a part. Then another thought came that pertained to a training that I had done over the week that included the idea of “Innocence”, when whenever we error. The next thought was bold and clear, “We are All innocent in essence”, they were the very same words I had heard the teacher say during the training course that week. The very atonement I was seeking by “stilling myself”, and becoming realigned, as I had unaligned myself with all the negative thoughts over that past hour, and caused myself distress, was now the very blessing that was an atonement for us all. That thought distinctly washed peace over me. In that peace, I felt the interconnectedness of that event and realized our power to transform our conditions.

Morning arose, and practical steps were taken to communicate with management, fix the lock, establish more safety of our property, etc.  But the real “fix” was in my mind and that I had allowed my heart to lead. I guess ol’ Linus was right the Spirit of the Great Pumpkin Lives!!