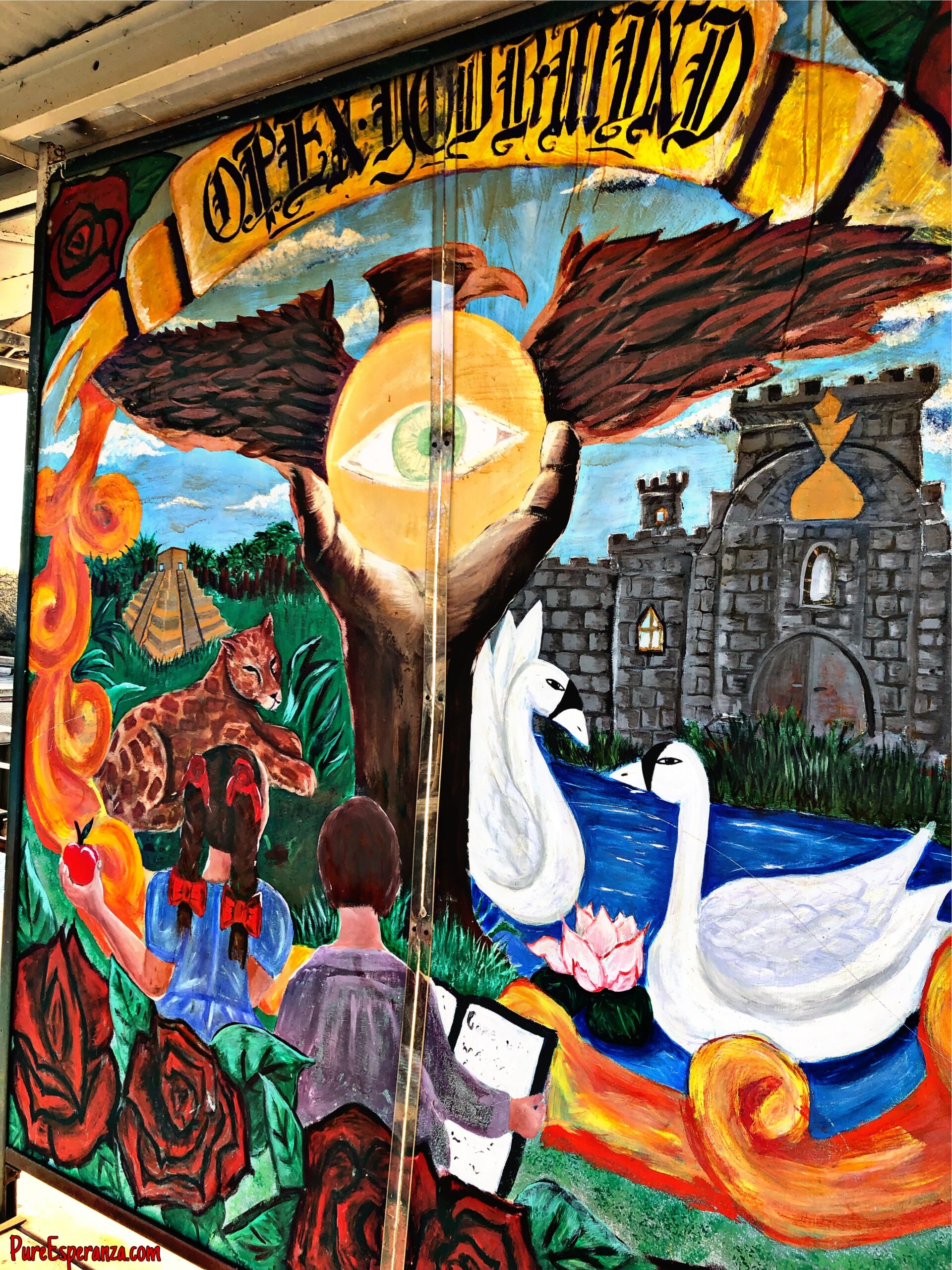 The sun shone gloriously streaming into every nook and cranny as she hustled up the stairs, through the gate, and onto the elevated train platform. With a bird’s eye view she looked over the streets below, feeling the warm radiance of the blinding light upon her face, forcing her to squint, as she soaked in the powerful energy of that moment, enveloped in the sunlight.

It was then, upon reorienting herself and reopening her eyes that a variety of colors whirled past the periphery of her gaze. There was the mural. She had walked past it many times before and had often thought she would like to take a photo of it but, time never seemed to afford the opportunity. She had photographed many magnificent masterpieces painted on the walls of the city of Detroit that played a part in inspiring her own Life. This mural was simpler in its lines, more elementary, non-boasting of itself, just a silent bystander. Yet, its message rang strong and clear.

She could feel the slight rumble under her feet, the distinct sound off in the distance, and in a flash, she knew that now was her chance. Afterall, this might be the last time she stood on this platform. She swung her back pack off, fumbled into its front pocket, reached in, and pulled out her cell phone. Her agile fingers worked to the open her phone app and “snap” that moment with the mural and its message. Her intuition told her it was of importance and that it would serve to defy appearances of time and space, proclaiming its truth Now… and forever.

Now, the roar of the train was imminent and just as she secured her phone safely, she turned to the arrival of the train car door opening behind her. That was the start of a day in which every moment was pre-set with the whisper of a thought from the mural’s flash message on the platform. It had spoken from the very depth of her soul and there painted in the mural’s bold letters had proclaimed, “Open Your Mind”.

As she rode the train working off her phone, she paused in between to see the new faces boarding and exiting, stop after stop. All seemed to be flashing snapshots in her mind, brilliant in color, as if in HD+++. The images were absorbed deeply for even then it told her to write with the feeling of those moments. She stored it all up and it kept coming to her throughout the day. It spoke with grand clarity an undeniable Power, “I Am here. I Am there. I Am in All”. It shook her with elation, total awe, and a child-like wonder that bubbled up from the deepest bottomless spring of her Joy.

She first noticed it on the face of a small child, a boy who nuzzled up to his papa on the annual “Take Your Child To Work Day”. She saw his scanning eyes of wonder as he looked on and into the crowds of commuters. She noticed standing commuters who looked far out the window and onto the day ahead of them. She saw the preoccupied minds full of concentration of those who were already answering incoming emails and responses as their work day had begun before they got to their offices. She saw those who were sleeping, dreaming, wanting, all in a flash.

Arriving at that great city of Chicago, exiting the train, descending the stairs, she felt the swooping energy of the crowd’s collective movement; and somehow she moved as if suspended in time, observing the people at ease, tight, flowing, constricted, alert, drowsy, automatic, ready, hidden, outward, scared, confident, agitated, peaceful, guarded and friendly, and she knew them all intimately as she knew herself through many moments Life had gifted her with.

Walking over one block, among wrist watch checkers, employment time clocks ticking, business open for a new day, car engines accelerating and stopping, pounding clacking and thunder from the rails overhead, street lights and neon signs continually flashing a multitude of realities simultaneously existing side by side. She could feel the swell of energy and its pulse in her step and breath with every flash.

She ducked down into the subway stairs and into the Pedway, an underground pedestrian system, heading east towards the lake, traversing across the city blocks. A bright orange haired child with a face so fair held his mama’s hand as she guided him through the long corridor. The old man held out his cup with rattling coins inside. The young professionals picked up their step, securing their place on the obstacle course maze of people. A crooked body shuffled up the stairs slowly, determinedly, off to work as his body had known his whole life. More colors and patterns covered beautifully dressed women of every shape, size, color and unique design. Old friends jostled and waved as they passed by one another. Starbuck barista smiles welcomed customers into their lines of brewing magic. Newspapers crinkled and pages flipped. Carrying cases rattled along. Escalators went up and down, revealing exploding art upon walls of ivory and vast rooms filled with plants, flowers and many places to sit to enjoy a moment.

In a flash, all perceptions, sights, sounds, smells, sensations, and feelings were internally recorded as she stepped into the spinning turnstile that would be detained for no one. Out into the fresh air once more, the sky broke loose. The buildings glistened, soaring high among the clouds. The light manure fragrance mixed with the freshly landscaped public patios, parks, and planters lined the vista. Spring flowers boasted their sensational arrangements. There in the close distance the light mingled, danced, and played upon that enigmatic body of water. The lake stood before her. It made her halt in her step and, in a flash, the mural’s message was there imprinted upon every encounter of that morning, every ripple upon that lake that she loved so dearly.

It spilled over into and painted the day, one encounter after the next. Her mind was open. She moved effortlessly and present to the flow of each new transition of the day. Her tasks were tedious yet, joyful. Her conversations were light yet, stood strong. Her day was full in every moment and yet, she found moments, often, to pause, and the questions that were delivered to her open mind were, “Could it be this easy?” and “Could Life be this Joyful?” In a flash, an immediate response was delivered to her open mind. “Yes!”